We have some new moves in our international chess challenge between Hutt International Boys' School (New Zealand) and The Links (England).

Here is the position when we last saw it on this blog. 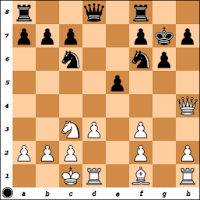 The Links now played 14 ...Nd4, placing the knight directly in the centre of the board. The knight attacks the pawn on f3, but White has a choice of ways to defend the pawn.

Hutt chose 15 Qh3, defending the pawn with the queen. Other moves, including Be2, Bg2, f4 and Qg3 were all considered too.

We now have this position.

It is not usually a good idea to move a knight to the side of the board, as its options are greatly reduced. However, it does look like The Links are shaping up to move the knight again in the near future, possibly to extend the dance of the queen and the knights.