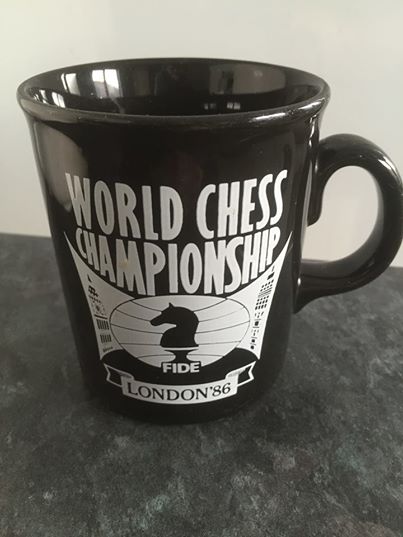 Today could bring a new World Champion of chess if Karjakin beats Carlsen in the 12th and final game of their title match in New York.

A draw would force tie-break games, to be played on Wednesday (Carlsen's birthday!).

Meanwhile, here is a relic from the first World Championship final I saw in person - a titanic Kasparov vs. Karpov match at the Park Lane Hotel, fully 30 years ago!
Posted by CSC Teesside at 01:18 No comments: 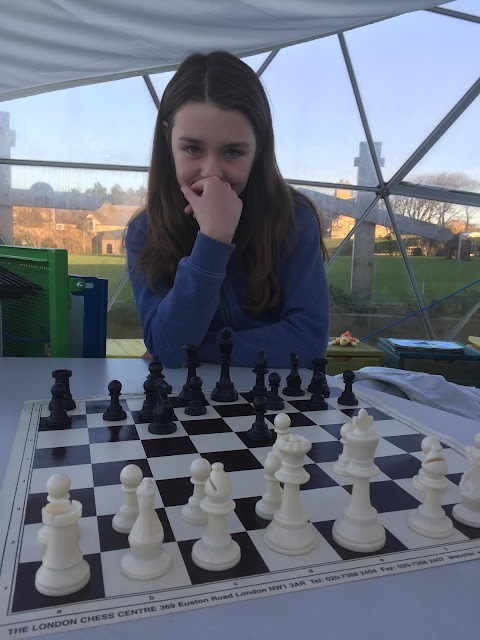 What do chess champions do when their own school is closed for the day?

Well, most of them probably go and hit the sales, but Caitlin put other people first (as usual) and came in to help with my sessions at Westgarth Primary. The Y4s could hardly believe their luck when the famous chess champion came along to offer some serious practice.

Fancy moaning about the youth of today? You'll have to go through me first.
Posted by CSC Teesside at 23:51 No comments:

Following months of uncertainty, the Delancey UK Chess Challenge is once again open for business.

Founder and long-term organiser Mike Basman has now handed over the reins to Sarah Hegarty. Sarah won the tournament in 1996 so we can easily say the event is in very safe hands.

CSC Teesside will be entering all of our schools, as usual, and it is important to note that ALL schools can enter, whether or not they involved with Chess in Schools and Communities.

Schools will have already received entry forms through the post and they can also enter online, here.

Qualifiers from the in-school phase of the tournament will qualify for the Megafinals. I am delighted to report that we will be hosting one of the Megafinals on Teesside, just as we did last year. It will be at Yarm School on Saturday 6 May 2017.

Top players from the Megafinals qualify for the Gigafinals and the top scorers there go on to face the ultimate challenge in the Terrafinal.

The dates of the latter stages have already been confirmed:

At some of our schools, we have been teaching a little bit about the ongoing World Chess Championship between Carlsen and Karjakin.

At the end of the sessions we split the children into two teams, named after the two players.

Then we added up the scores to see who would win our own versions of the World Chess Championship. 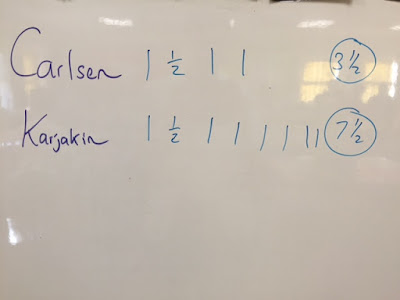 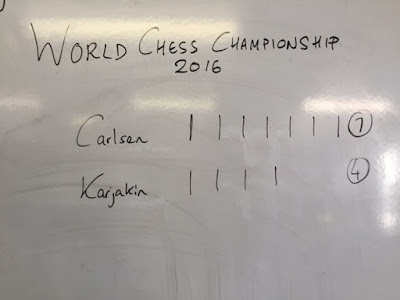 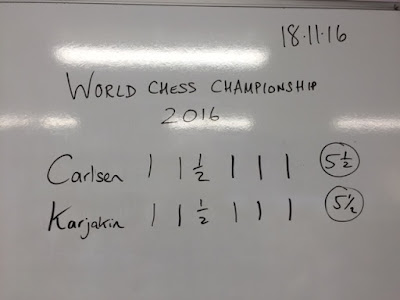 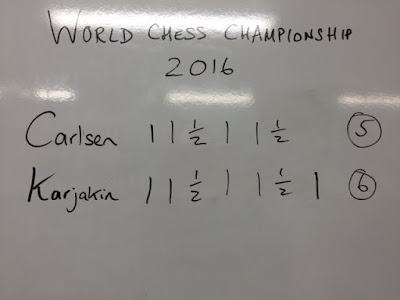 Posted by CSC Teesside at 01:06 No comments: 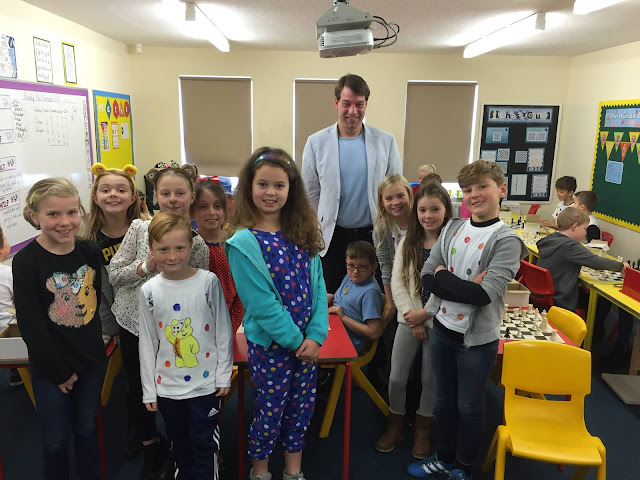 All in a day's work at Ings Farm!
Posted by CSC Teesside at 01:03 No comments: 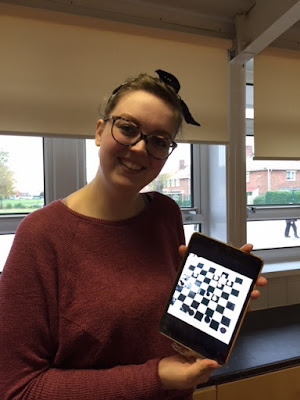 What happens when a Teacher vs. Pupil game runs into playtime, and the pupil has the advantage?

Clever teachers photograph the position using an iPad so they can continue the battle later!

At least that's what Miss Wilde did at Park End Primary today!
Posted by CSC Teesside at 01:02 No comments:

Every year, we take two or three teams down to the Queen Elizabeth Grammar School ('QEGS') in Wakefield for the annual HMC Chess Championships.

Last year we finished second in both the Under-9 and Under-11 categories, but it has been a long time since we actually won one of the sections.
This year we had one team in the Under-9 section and two in the Under-11s. All three teams started well with excellent victories in the first of the six rounds. We then had our usual share of mixed fortunes as we headed towards the halfway point of the event, with all three teams suffering one defeat and earning a second win.

There was a great amount of drama in the second half of the tournament. The Under-9s won two more matches and lost one. They did very well to beat QEGS A by a narrow margin in the fourth round and they finished off with a great 4-0 victory over RGS D in the final round, earning them a fine fourth place.

Captain Ajay Selvan led from the front, winning three games, drawing two and losing just one. Ayan Thomas won three and lost three, as did Aryan Nalawade. Grace Crawford continued to play excellent chess and won four of her games, including the decisive encounter in the match against QEGS A. This game will will stick in my mind not just because Grace played so well to earn a famous match victory for the team, but also because she played the second half of the game with a nosebleed. The sight of her holding tissues to her blooded nose with one hand as she pushed her pawn forward to become a new queen with the other is one that will definitely stay with me!
We had two teams in the Under-11 section. The B team played extremely well all day long and managed to win three, draw two and lose only one of their matches. Their most important match was against RGS A in the penultimate round. They managed a fabulous 2-2 draw, with wins from Gaurav Kannan and Samantha Botterill. This was not only a great result for the B team (RGS A were the defending champions) but also for the Yarm A team, as it allowed them to keep pace with RGS A as they went into the final round.

Captain Gaurav had a good day on board one, winning three games against strong players. Samantha and Keya Shah won four games each on their HMC debuts. Rishik Kalagara won two, drew one and lost three. His last game, in which he managed to force a draw despite being on the point of losing for a long time, made him a hero as it meant his team won their match against RGS C and secured fourth place in a tough field.

Yarm A looked to have stumbled fatally in the third round when they lost heavily to RGS A. However, thanks partly to the B team's heroics they suddenly found themselves in with a chance of taking the title after all. They went into the final round dead level with RGS A and just half a point ahead of QEGS B. They now had two problems: they had to beat QEGS A and they had to better the match score of RGS A, as the tiebreaker favoured their rivals (because RGS A had beaten Yarm A earlier in the tournament). Quite a task!

Fortunately, captain Ammar Soni was on the form of his life and he won a very good game to finish on a personal score of five wins and a draw from six games. Adhi Dinakaran also won, to take his score to four wins from six games. Henry Parker won his third game of the tournament too, although he was under severe pressure and a lot of material down for most of the game. Yet Henry has a good eye for a checkmate chance and with his last good piece he swooped down to checkmate the opponent's king. Yusuf Syed had played like a real champion all day long and he saved his best game till last, chasing his tough opponent's king all the way across the board and into the jaws of doom. The position was fiendishly complicated but Yusuf remained remarkably cool to secure the victory that led to Yarm A becoming the new HMC Under-11 champions!
Although we have distant memories of our Under-9s winning their section many years ago - back in the great days of Thomas Mavin - we cannot remember Yarm ever having won the Under-11 section before. A magnificent achievement!
One thing that certainly helped all of our teams was being able to practice with our brand new chess clocks, which were very kindly purchased by the Yarm Prep. School Social Committee. This meant that none of our players felt too nervous about using clocks in the tournament and none of them lost on time.

Congratulations, everyone! It was a superb day of chess.

CSC Teesside have a very special expedition coming up in December and tonight we got our squad together for some top-secret training and preparation. 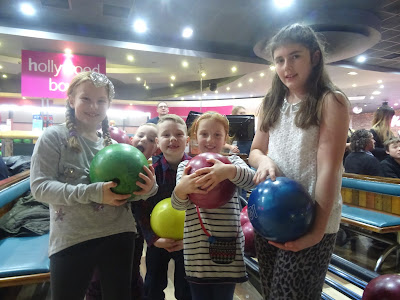 If the forthcoming event (about which more later) has anything to do with bowling or eating pizzas then we will definitely be in with a chance. 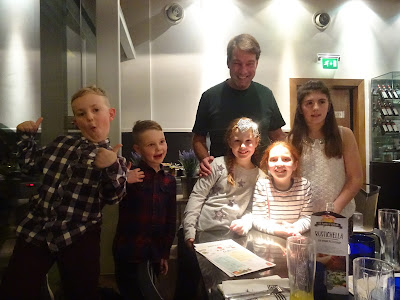 CSC Teesside are pleased to announce they are now ready for their London expedition. The only question that remains is...do we think London is ready for CSC Teesside...!?
Posted by CSC Teesside at 12:32 No comments: 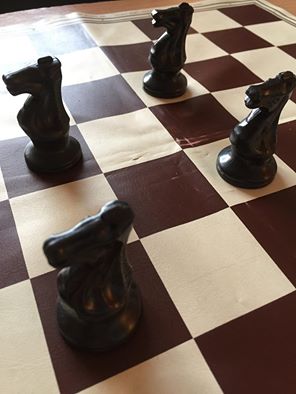 These dark knights are certainly starting to close in.
Posted by CSC Teesside at 11:36 No comments: