I have been experimenting with the combination of music and chess this year.

Children are usually very excited when they play chess and the noise inevitably builds up from initial whispers to torrents of conversations. This has the obvious effect on concentration levels and leads to blunders.

Playing soothing music - not too loudly - as the children play their games is having a big impact on the problem. Further tests are required and will definitely follow over the remainder of the school year.
Posted by CSC Teesside at 23:23 No comments: 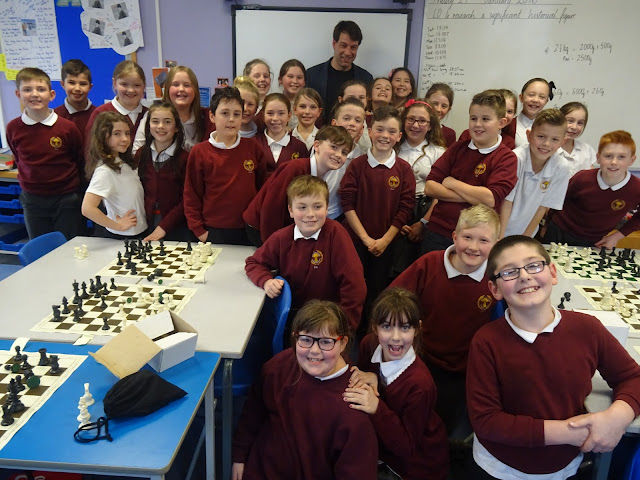 I squeezed in a surprise visit to Wheatlands Primary School this week, to catch up with one of my top classes from last year.

They may be older and taller but they have retained their admirable passion for chess. Incidentally, it was from Wheatlands that I received the received the extraordinary chess cakes last year, which can be viewed here. 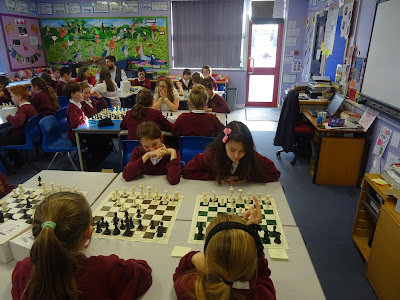 We studied the famous game Paul Morphy vs. The Duke and Count from 1858 before indulging in a spell of Lightning Chess. 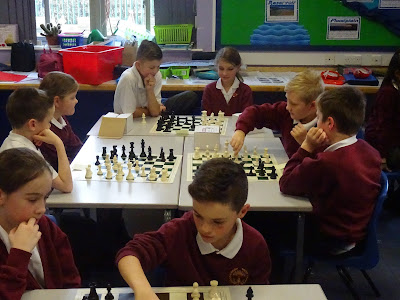 With only 10 seconds of thinking time for each move, the children had to remain full focussed for the duration of the event. They managed to do so with élan. 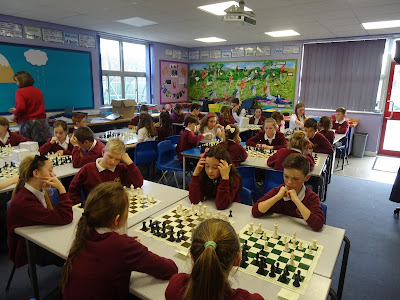 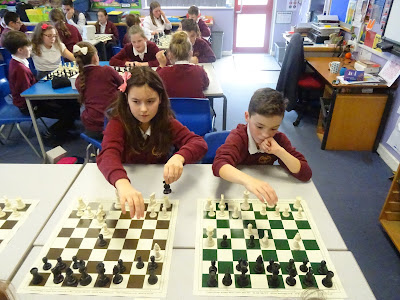 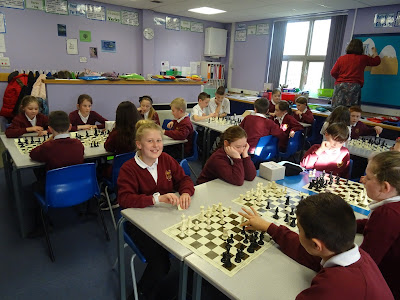 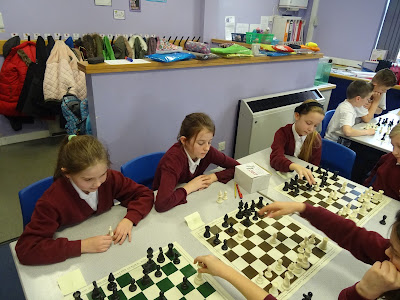 What a great class of children - and what a great school! Thank you, Wheatlands!

Posted by CSC Teesside at 01:13 No comments: 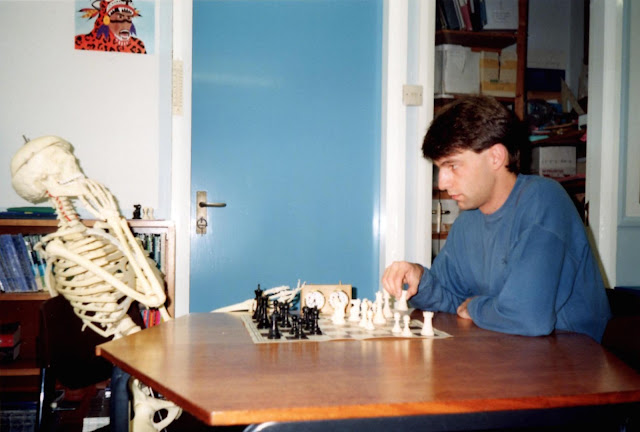 Specifically, it is the art of:

3) Using a convenient prop as quickly as possible, before the teacher comes back into the classroom.
Posted by CSC Teesside at 10:28 No comments: 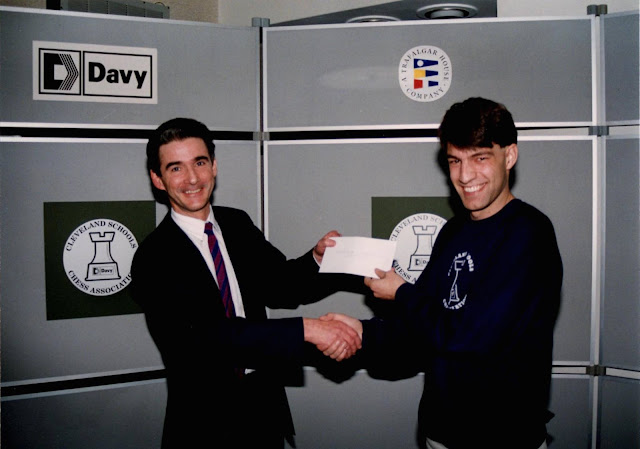 Following our brief association with Teesside Positive People, we secured a three-year sponsorship deal with engineering firm Davy McKee. This was in 1990.

I believe the Davy part refers back to Sir Humphry Davy, inventor of the miners' safety lamp back in 1815.

With Davy McKee's support, we were able to invest in sweatshirts for our brand new Cleveland Schools' Chess Association. Davy McKee also funded a series of tournaments - three each year - at Southlands Centre, providing medals, trophies, certificates and covering the cost of the venue.

We still needed more funds to be able to enter our junior teams into the county championships. This we did through a large variety of fundraising activities, but it was never an easy task.

The photograph was used in a number of newspapers at the time, the pose gifting them the chance to use the standard headline ''Cheque, mate!'' or similar.

These days we try to avoid cliches. Yes, we avoid them like the plague.
Posted by CSC Teesside at 10:43 No comments:

Back to 1989, when we were starting to make an impression in the world of junior county matches. 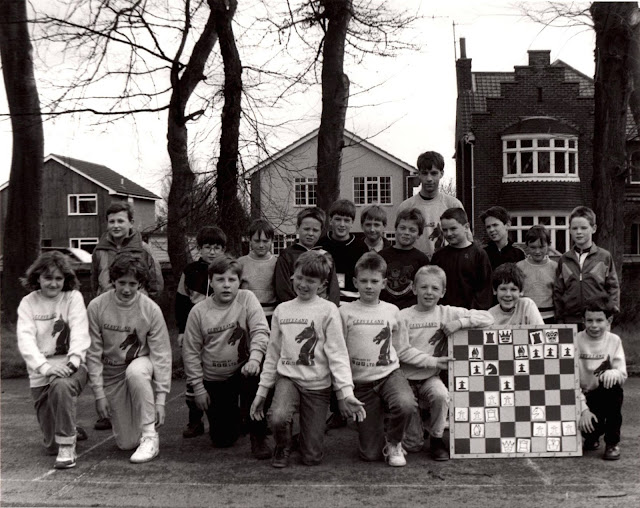 My first Saturday morning club was in a hut on Wooler Road, Hartlepool. The hut was owned by Teesside Positive People and after a little bit of negotiating they agreed to help our county squad by donating team sweatshirts. 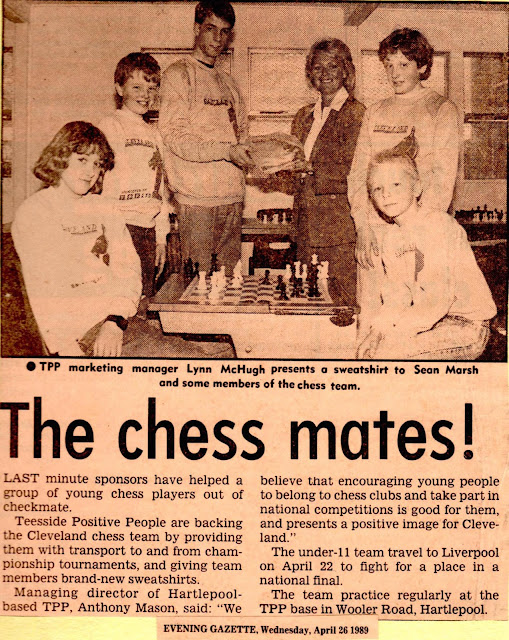 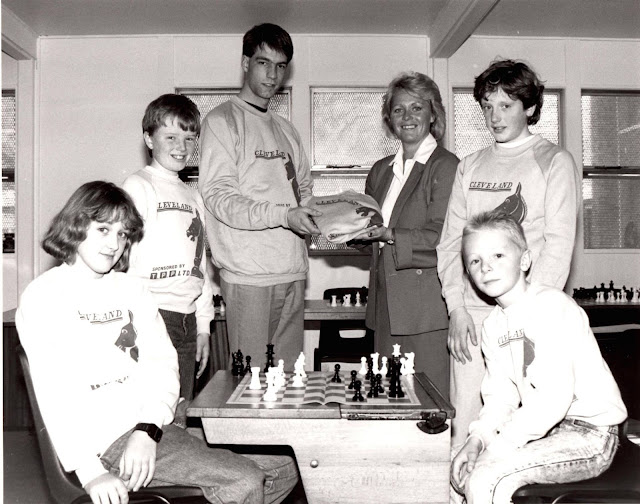 I remember I had to return mine directly after this photoshoot and I never saw it again!

Things were becoming more professional (the photographs were taken during an Under-11 training day) but it still took another four years for one of our teams to qualify for the finals.

TPP helped us for just the one year. We then switched to another sponsor, but that's another story...
Posted by CSC Teesside at 22:17 No comments: 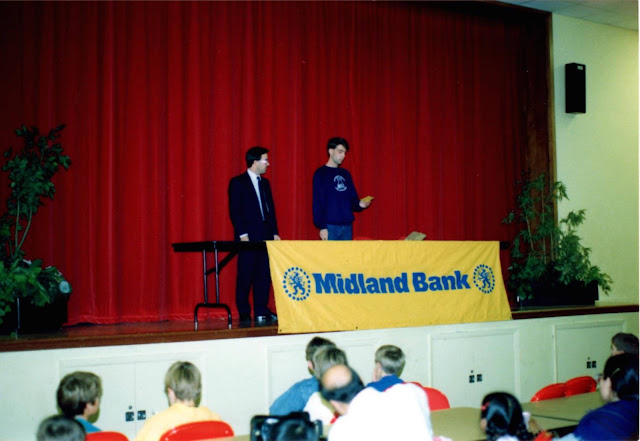 We had some success attracting sponsorship from a variety of sources. Money is definitely out there, but it's not so easy to get it.
There was a period of time when banks would help me in my ventures. Not with large amounts, but we always put on a good show regardless.

Today's photograph dates back to 1991, when we tempted Midland Bank to part with £100 to enable us to run a big tournament at the Southlands Leisure Centre.

I remember the man from the Midland looked a lot like Ben Elton.

It soon became much more difficult to obtain money from any bank. I tried the traditional method a few times: walking in with a stocking mask on my head and demanding money with menaces. In fact I wouldn't have minded if they'd kept the menaces and just handed over the cash. However, without an accomplice it looked a bit silly, what with the spare stocking leg flapping about all over the place.

But there were other avenues to explore...

Posted by CSC Teesside at 11:20 No comments: 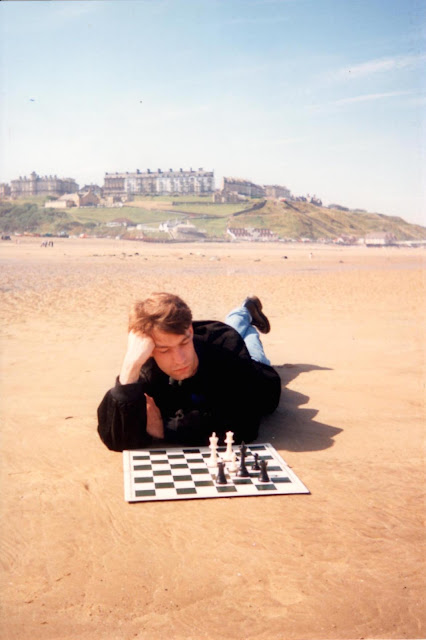 Chess on Saltburn beach, 1992. An early foray into introducing chess into the community. Simply set up the pieces and play all-comers. This photograph was taken by artist Martin Smith, with whom I collaborated (along with a couple of others) on the local history book, In Days of Poss Tubs and Pigs back in 1986.

The famous Zetland Hotel - centrepiece of Henry Pease's new vision of Saltburn and completed in 1863 - can be seen in the background. It has since been converted to luxury apartments.

Howard Staunton, the (unofficial) English World Chess Champion, visited the Redcar chess tournament of 1866 and had a day trip to Saltburn. He was, however, unimpressed, and wrote:

''The excursions promised to places of interest in the neighbourhood, consisted of a trip to Saltburn, where everybody paid for himself, and could hardly get anything worth having even upon those independent terms.''

''The shortcomings in question we are willing to believe the result of inexperience on the part of the Managing Committee, and we are quite sure they will not occur at any future Meeting of the Association.''

If Staunton had returned a mere four years later he could have had a go on the first version of the famous cliff lift.
Posted by CSC Teesside at 22:41 No comments: 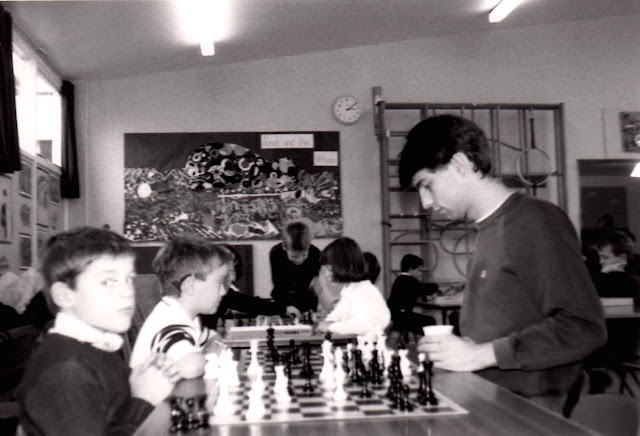 Leaving education in the 1980s wasn't ideal. As the old joke had it: ''America have Ronald Reagan, Bob Hope and Stevie Wonder. We, on the other hand, have Margaret Thatcher, no hope, and...no wonder.''

Norman Tebbit's inferred advice to ''get on your bike and look for work'' was worthless to me (I never did learn how to ride one).

So I started teaching chess in schools, with the plan of doing that until something more permanent came along. That was back in 1988, the very year this photograph was taken (October, I think). The location is Greatham Primary School. I ran a Saturday morning club there for many years too.

As can be seen, the world was in black and white back then. Schools didn't have computers, security fences (or, indeed, any kind of security) or even safety cups with rubber lids in which to hold one's cup of tea. ''Hey! Watch where you are going!'' was a reasonable response to anyone bashing into a tea-carrier. Nobody was sued.

1988 also brought the introduction of inset days (IN-SErvice Training days) but back then they were called Baker Days. I honestly thought schools had special days dedicated to making pies and cakes until someone pointed out they were named after Kenneth Baker, the minister who introduced the concept.
Posted by CSC Teesside at 10:51 No comments:

CSC at the London Chess Classic

Five CSC Teesside juniors - Caitlin (captain), Chloe, Grace, Finlay and Tom - travelled up to London at the end of December to take part in the 7th London Chess Classic.

I am hoping to present a lot more stories and photos from the event in the near future, but for starters here is Captain Caitlin making the ceremonial opening move for former World Champion Vishy Anand.