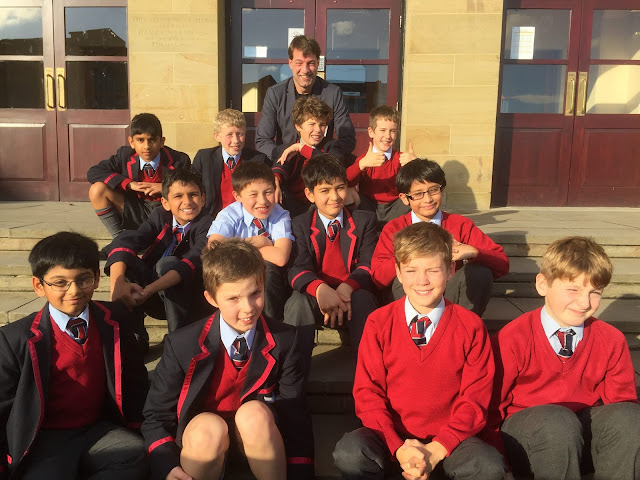 We had three teams in action at this year's HMC chess championships; two in the Under-11s and one in the Under-9 section. It turned out to be a very exciting day of chess.

The Under-9s, brilliantly captained by Henry Parker (who scored 5/6) and also featuring Yusuf Syed (5/6), Oscar Thomas (2.5/6) and Ajay Selvan (3.5/6 - and still only Y3!), started very well with two powerful match victories. They then faced their first really tough test, against perennial rivals RGS A. After a very hard match, they ended up with a creditable 2-2 draw. However, they lost their next match by a narrow margin and fell behind both RGS A and QEGS A with two rounds left to play. A big effort was required and the team rose immediately to the challenge with a fabulous win over QEGS A, thus catching them up. The battle for second place raged on into the final round, in which our team showed they had saved the best until last, as they hammered RGS C 4-0 to zoom ahead of QEGS A to clinch a very impressive second place.
The Under-11s had their work cut out to match the achievements of their younger counterparts. The B Team - Matthew Anthony (4.5/6), Adam Jones (2/6), Luke Nargol (3/6) and Will Craggs (2.5/6). - started well with victories against Dame Allan's and Ampleforth but faded during the middle rounds of the event. However, they finished with a fine 3-1 win against Pocklington and this helped them to a share of 7th place. Matthew was the captain and he played with a great sense of responsibility; his score of four wins, one draw and just one defeat - against eventual champions RGS A - was one of his best-ever championship performances.
The A Team, captained by a very determined Ihsaan Mahmood, played consistently well throughout the six rounds. A narrow defeat to RGS A in the third round left them with too large a gap to bridge in the battle for first place, but two fabulous 4-0 victories in the last two rounds - against Dame Allan's and QEGS A (!) respectively - secured a very fine second place for the team. Ihsaan, Edward Adams and Jake Meager all scored 5/6 (with Jake being the only person to win a game against RGS A on the day) and Ammar Soni, still young enough to return with next year's Under-11 team, finished with 3/6.

Second place in both events represents our best showing at the HMC event for some time. 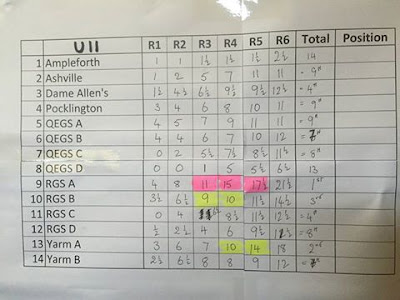 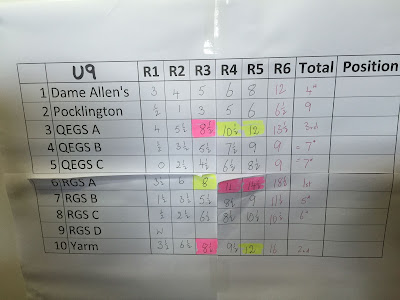 Well done, everyone!
Posted by CSC Teesside at 23:21