Further to last month's update, I am delighted to report that we now have 11 CSC Teesside schools up and running with our online lessons.

To say this is above the national average is a huge understatement.

Some of our schools have even expanded the number of chess lessons from their usual number.

This quite clearly shows how much our CSC Teesside schools value our chess lessons.

We are delivering sessions across a variety of platforms and our highly-trained tutors are pulling out all of the stops to ensure the children receive top-quality lessons.

Feedback from the schools is universally positive.

Additionally, we have been experimenting with a number of online special events.

We followed up a traditional Swiss tournament with two simultaneous displays by top tutor and player Jo Hutchinson.

The first one saw Jo taking on four juniors and two parents at standard chess; she won 6-0.

For the second simultaneous display we switched to Three-Check Chess. This chess variant only requires a player to check the opponent's king three times to win (checkmate also ends the game).

It was the first Three-Check simultaneous display I have ever known.

Jo had her work cut out to keep a tally of the checks both for and against across the six games, especially as she was checked twice in the first three moves in one game (1 d4 e5 2 dxe5 Bb4+ 3 c3 Bxc3+).

However, despite a couple of anxious moments, Jo managed to win all six games. 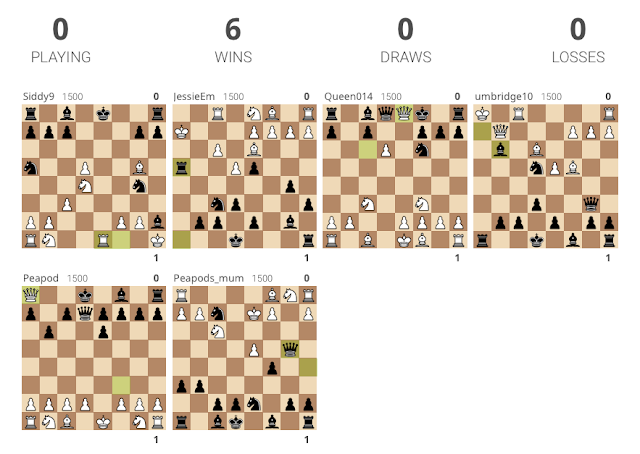 More online events are in the pipeline as we continue to wait patiently for the return of real chess action.