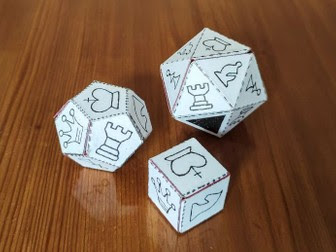 I have been using dice chess in lessons since 1988. Chuck-a-Chess was the name of the original version I used, but the brand is no more.

Another version, Topple the King, was shown to me by its creator, Mike McCafferty, during one my expeditions to Scotland.
It was another training day, this time in Hull, that I worked with Ray Ezra. Ray has been working on Chess Dice Nets, and here is his own story...
Thank you for your interest in my Chess Dice Nets.
It all started with a request made by John Foley asking me if I would be interested in manufacturing 12 and 20 sided chess dice for him.
The idea is that dice with more sides produce outcomes that approximate to an optimal frequency. John consulted Rita Atkins, who advised him on this mathematical aspect.

On 6th April 2021, I came up with the concept of chess dice nets. Of course, chess dice existed already, and nets of platonic shapes also existed, but nets showing chess figurines were nowhere to be found. The closest was the net of a D6 cube showing dice numbers as dots.
So I thought, well...why not create a rich cross-curricular chess activity, where learners of chess make their own chess dice?
Learners would then keep their dice, and the expense is minimal also.
Schools and institutions can print the master template on strong card for learners.

The Chess Coach, and you surely know about this, doesn't have to worry about buying dice, much less collecting them in when used. Learners get to keep what they've made!
And if they get it wrong, they can make another one, as it's only card, and you don't pay for it either! 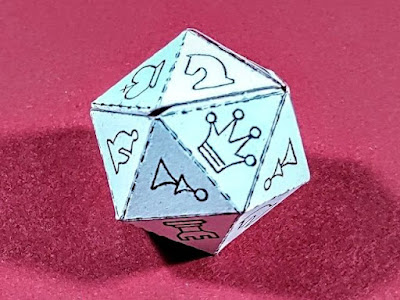 Anyway, I've got my own original Chess Dice Nets designs on Tes.com, the ones I sent you, and I've made myself a shop with more teaching resources.
Here's a link.

However, you can now download Chess Dice Nets at ChessPlus for free. You can get a D6 and a D12, but you'll have to wait a bit for the D20, unless you want my original one for £1!

I hope you use them in your lessons.
An idea is to use a D6 one week, followed by a D12 the next week, and then a D20 the following week. 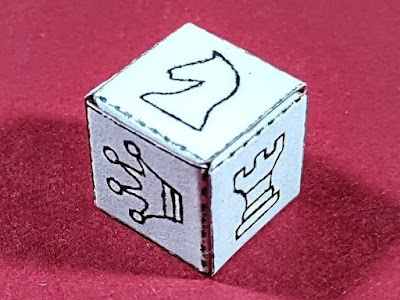 The Chess Dice Nets can be decorated, and also, because they're light, they shouldn't knock over any chess pieces or pawns when rolled, but work they will.

Manufacturers of chess dice will hate me for this, no doubt, but I believe my priority is Chess Coaching over dice making!
Posted by CSC Teesside at 12:28