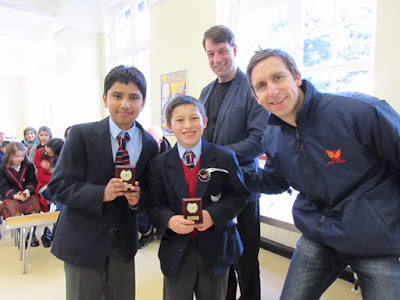 This year marks 21 years of the UK Chess Challenge. It is the world's biggest chess tournament and regularly features over 48,000 children. We had 53 players in action for the first stage of the competition, all the way from Y2 to Y6. A very healthy number indeed! They played seven full rounds of chess as they battled away for the top honours in each of the three sections.
The Y2s have been working hard during their first year of chess and they made their tournament debuts in a tough, combined section with the Y3s. Tanveer Timmons was the top Y2 Boy, with an excellent score of 15 points out of 21 - one point ahead of Seth Holland and Aryan Nalawade, who shared second place. Elizabeth Neilson matched Tanveer's score and was the Best Y2 Girl, a point ahead of Isobel McGlade. Kate Howell was just behind, in third place.
The overall champion of the section - and Best Y3 Boy - was Ajay Selvan, who won all of his games (the only player in any of the sections to do so). Ayan Thomas held second place, three points behind Ajay, and Shola Afolabi was third. Grace Crawford was the Best Y3 Girl, with Zaara Soni and Rishika Chawala finishing second and third respectively.

The Y4s and Y5s were combined to form another tough section. Henry Parker - a man of many quick checkmates - became the top Y4 Boy, pipping Yusuf Syed to the post with a dramatic last-round victory. Amen Khunda played well too and earned himself a fine third place. Isra Ali was the top Y4 Girl.

Ammar Soni - who reached a very advanced stage of the UK Chess Challenge in 2015 - started this year's event in similar style as he raced to the top to become the top Y5 Boy, having won six and drawn one of his seven games.


Adhi Dinakaran was second and Gaurav Kannan was third. The race to become the top Y5 Girl ended in an unlikely tie between Samantha Botterill and Keya Shah. They were on different scores for most of the day but somehow ended up completely level. They had drawn with each other earlier in the tournament, so there was clearly no separating them!
We expected a very competitive battle in the Y6 section and we were not disappointed. We don't always have so many Y6s at this event so we were delighted to see many of our stars in action. Edward Adams seemed to be on course for a typical maximum score but a late loss to Aishani Paul left things very much in doubt until the end of the final round. Edward recovered well but had to work very hard to break down the resistance of Will Craggs, who only capitulated deep into the endgame. Meanwhile Shish Nair, with his hard-earned victory over Jake Meager, had caught up to Edward and they shared first place. Jake - without doubt one of our most consistent players over the last three years - shared third with Danny Scott. This was Danny's best tournament to date and he outscored several more experienced players.

This was, perhaps, our strongest ever year for Y6 girls, with five of them being in the thick of the action all day long. Eventually, Aishani Paul - thanks partly to her fabulous victory against Edward - earned the title of Best Y6 Girl, one point ahead of Romilly Nichols, and Jasmine Kaur.

Meanwhile, I couldn't help noticing an unusual winning move in the shape of 'Bat to b1, checkmate.' 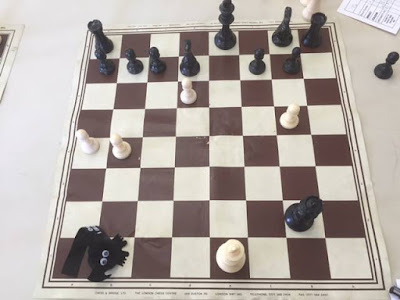 It was made possible by the handing out of various little UKCC prizes throughout the day and one player's lack of a spare queen after promoting a pawn. 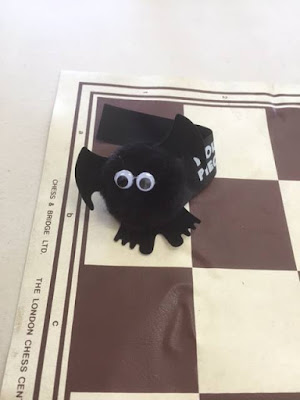 I have been running chess tournaments for a loooooong time and it's the very first time I have heard that particular sentence.

All of the above-named players (apart from the bat) will now be invited to play in the forthcoming Megafinal, where they will pit their wits and skills against the top players from all cross the Yorkshire region.

It was a wonderful day of chess, played in a very sporting atmosphere.

Congratulations to all players and thank you to all of the Yarm School staff who made the event possible.

All photographs are © Johannes Grundmann (apart from the two with the bat, which are © Sean Marsh).
Posted by CSC Teesside at 08:52